PMI 5-aside Indoor Leagues, kick off every Tuesday evening at the superb sports facility in Rickmansworth, situated within the grounds of the Royal Masonic School for Girls. The sports venue sits as a perfect back drop to 24 acres of idyllic scenery.

All our children’s football parties are currently held at the amazing Harefield Academy Indoor/outside 3G centre. 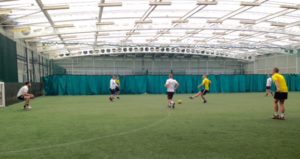 PMI began life as a small group gathering, encouraging local businesses and work friends the chance to play indoor football without the disturbance of outside elements.

In time, this slot grew, and in 2014 became the most competitive indoor league in Hertfordshire.

PMI is moulded around personal experiences from other 5 + 6-aside leagues; some good and some bad. We wanted to incorporate all the good experiences into one indoor facility, where teams can feel safe and enjoy their football, without the stress and worries that come with other set-ups.

It has become very apparent to us of late that most men and women would favour a kick-about amongst themselves, rather than join a competitive league because of previous bad experiences and the unfortunate reputation that proceeds most outdoor leagues. Our goal is to abolish this negative stigma and urge men and women’s teams to join our Indoor League for one campaign and promise they’ll never look back!

Proud to be PMI 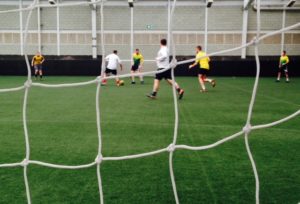 PMI 5-aside prides itself on organisation and zero tolerance towards violence and inappropriate behaviour. Many players are put off from 5-aside football these days, sadly because of the unfair reputation small sided football has been tarnished with, due to other outside leagues becoming too commercialised and forgetting the basics.

At PMI, the focus is on safety participation. We take a hands-on approach to ensure all sides enjoy the indoor experience, whilst allowing the competitive side of the game to remain in tact. All matches are refereed to an exemplary standard by fully qualified Hertfordshire FA officials, ensuring all games run smoothly and without incident.

Great to be indoors when it’s cold outside!

PMI 5-aside boasts the only record in small sided leagues to never have a match called off due to rain or snow! Therefore, whatever the conditions are outside, you will never be affected inside.

The indoor facility is complete with a hard rubber court, allowing firm grip, yet offering maximum opportunity for skill and deliverance of the football. The site offers parking, changing facilities and showers.

At PMI we strive for excellent organisation, communication and deliverance in all our services to ensure the league and Cup nights run like clockwork.